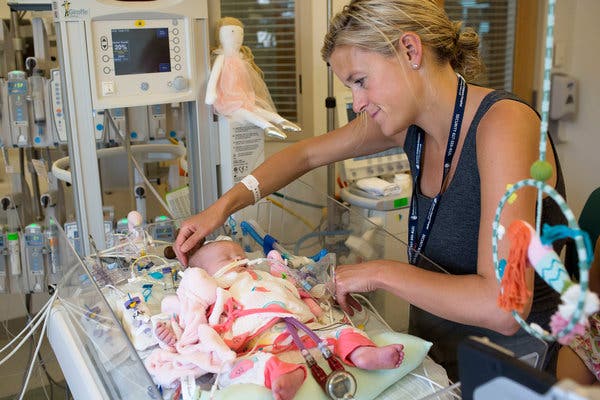 Kate Bowen with her infant, Georgia, in the intensive care unit at Boston Children's Hospital. Doctors tried to revive the baby's heart with an infusion of one billion mitochondria.CreditCreditKatherine Taylor for The New York Times

When Georgia Bowen was born by emergency cesarean on May 18, she took a breath, threw her arms in the air, cried twice, and went into cardiac arrest.

The baby had had a heart attack, most likely while she was still in the womb. Her heart was profoundly damaged; a large portion of the muscle was dead, or nearly so, leading to the cardiac arrest.

Doctors kept her alive with a cumbersome machine that did the work of her heart and lungs. The physicians moved her from Massachusetts General Hospital, where she was born, to Boston Children’s Hospital and decided to try an experimental procedure that had never before been attempted in a human being following a heart attack.

They would take a billion mitochondria — the energy factories found in every cell in the body — from a small plug of Georgia’s healthy muscleand infuse them into the injured muscle of her heart.

Mitochondria are tiny organelles that fuel the operation of the cell, and they are among the first parts of the cell to die when it is deprived of oxygen-rich blood. Once they are lost, the cell itself dies.

But a series of experiments has found that fresh mitochondria can revive flagging cells and enable them to quickly recover.

In animal studies at Boston Children’s Hospital and elsewhere, mitochondrial transplants revived heart muscle that was stunned from a heart attack but not yet dead, and revived injured lungs and kidneys.

Infusions of mitochondria also prolonged the time organs could be stored before they were used for transplants, and even ameliorated brain damage that occurred soon after a stroke.

In the only human tests, mitochondrial transplants appear to revive and restore heart muscle in infants that was injured in operations to repair congenital heart defects.

For Georgia, though, the transplant was a long shot — a heart attack is different from a temporary loss of blood during an operation, and the prognosis is stark. There is only a short time between the onset of a heart attack and the development of scar tissue where once there were living muscle cells.

The problem was that no one knew when the baby’s heart attack had occurred. Still, said Dr. Sitaram Emani, a pediatric heart surgeon who administered the transplant, there was little risk to the infant and a chance, though slim, that some cells affected by her heart attack might still be salvageable.

“They gave her a fighting chance,” said the infant’s mother, Kate Bowen, 36, of Duxbury, Mass.

The idea for mitochondrial transplants was born of serendipity, desperation and the lucky meeting of two researchers at two Harvard teaching hospitals — Dr. Emani at Boston Children’s and James McCully at Beth Israel Deaconess Medical Center.

Dr. Emani is a pediatric surgeon. Dr. McCully is a scientist who studies adult hearts. Both were wrestling with the same problem: how to fix hearts that had been deprived of oxygen during surgery or a heart attack.

“If you cut off oxygen for a long time, the heart barely beats,” Dr. McCully said. The cells may survive, but they may never fully recover.

While preparing to give a talk to surgeons, Dr. McCully created electron micrographs of damaged cells. The images turned out to be revelatory: The mitochondria in the damaged heart cells were abnormally small and translucent, instead of a healthy black.

The mitochondria were damaged — and nothing Dr. McCully tried revived them. One day, he decided simply to pull some mitochondria from healthy cells and inject them into the injured cells.

Working with pigs, he took a plug of abdominal muscle the size of a pencil eraser, whirled it in a blender to break the cells apart, added some enzymes to dissolve cell proteins, and spun the mix in a centrifuge to isolate the mitochondria.

He recovered between 10 billion and 30 billion mitochondria, and injected one billion directly into the injured heart cells. To his surprise, the mitochondria moved like magnets to the proper places in the cells and began supplying energy. The pig hearts recovered.

Meanwhile, Dr. Emani was struggling with the same heart injuries in his work with babies.

Many of his patients are newborns who need surgery to fix life-threatening heart defects. Sometimes during or after such an operation, a tiny blood vessel gets kinked or blocked.

The heart still functions, but the cells that were deprived of oxygen beat slowly and feebly.

He can hook the baby up to a machine like the one that kept Georgia Bowen alive, an extracorporeal membrane oxygenator, or Ecmo. But that is a stopgap measure that can work for only two weeks. Half of the babies with coronary artery problems who end up on an Ecmo machine die because their hearts cannot recover.

But one day Dr. Emani was told of Dr. McCully’s work, and the two researchers met. “It was almost an ‘aha’ moment,” Dr. Emani said.

Dr. McCully moved to Boston Children’s, and he and Dr. Emani prepared to see if the new technique might help tiny babies who were the sickest of the sick — those surviving on Ecmo.

It was not long before they had their first patient.

Early one Saturday morning in March 2015, the hospital got a call from a hospital in Maine. Doctors there wanted to transfer to Boston Children’s a newborn baby boy whose heart had been deprived of oxygen during surgery to fix a congenital defect.

The baby was on an Ecmo but his heart had not recovered.

“We turned the intensive care unit into an operating room,” Dr. Emani said.

He snipped a tiny piece of muscle from the baby’s abdomen. Dr. McCully grabbed it and raced down the hall.

Twenty minutes later, he was back with a test tube of the precious mitochondria. Dr. Emani used an echocardiogram to determine where to inject them.

“The spot that is weakest is where we want to go,” he said. “It is important to give as much of a boost as you can.”

He injected a billion mitochondria, in about a quarter of a teaspoon of fluid.

Within two days, the baby had a normal heart, strong and beating quickly. “It was amazing,” Dr. Emani said.

The scientists have now treated 11 babies with mitochondria, and all but one were able to come off Ecmo, Dr. Emani said. Still, three of them ultimately died, which Dr. Emani attributes to a delay in treatment and other causes.

Two died because their hearts were still so damaged, and one died of an infection. All of the more recent patients survived and are doing well.

In comparison, the death rate among a similar group of babies that did not get mitochondrial transplants was 65 percent. And none of the untreated babies recovered any of their heart function — more than a third of the survivors ended up on heart transplant lists.

More recently, Dr. Emani and his colleagues have discovered that they can infuse mitochondria into a blood vessel feeding the heart, instead of directly into the damaged muscle. Somehow the organelles will gravitate almost magically to the injured cells that need them and take up residence.

He and his colleagues are persuaded that these transplants work, but acknowledge that it would take a randomized trial to prove it.

The main problem is a scarcity of patients. Even if every pediatric center in the United States participated, along with every infant with injured heart muscle, it still would be hard to enroll enough participants in the trial.

But what about adult heart patients? Researchers are hoping that mitochondrial transplants also can repair heart muscle damaged during heart attacks in adults. And finding enough of those patients should not be an issue, said Dr. Peter Smith, chief of cardiothoracic surgery at Duke University.

Already researchers are planning such a trial. The plan is to infuse mitochondria or a placebo solution into the coronary arteries of people having bypass surgery or — an even more dire situation for the heart — having both bypass and valve surgery.

The patients would be those whose hearts are so damaged that it would be difficult to wean them from heart-lung machines after surgery. For these desperate patients, mitochondrial transplants “are a really intriguing option,” Dr. Smith said.

“The likelihood is very high” that the study will begin next year, said Annetine Gelijns, a biostatistician at Mount Sinai Medical Center in New York.

For Georgia Bowen, the procedure came too late: The portion of her heart muscle affected by the heart attack had died. Her doctors implanted a device that takes over the heart’s pumping, and hope her heart will recover enough for them to remove the device.

But, to be safe, they put her on a list for a heart transplant. She seems to be improving, though — she is breathing on her own and can drink breast milk through a tube. Her heart is showing signs of healing.

“Georgia is a miracle who continues to fight daily and persevere through the obstacles she is dealt,” Ms. Bowen said.

“In our hearts, we know she will pull through this and come home.”